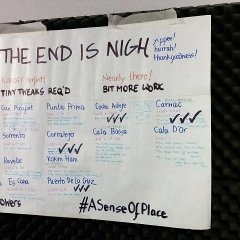 Just finished a busy four day recording and mixing stint at SoundARC, with a real mixed bag of musical projects. Friday morning saw Roy Lendor return to continue work on his début RnB/pop-tinged album. We’re just over half way through the mixing process now, and things are sounding really sweet. Friday afternoon saw Ben Drake pop in to track bass, lead guitar and keys to his soon-to-be-released single titled ‘Forever’. Got a little bit of editing to do now before we can track vocals, which are currently pencilled in to be tracked in a couple of weeks. Sunday was a very different beast, with doom metallers Gévaudan returning at the ‘ARC to track three brand-new songs. Everything ran nice and smoothly, and is sounding big! Vocal tracking and mixing will happen next weekend, which I’m really looking forward to. Finally, Monday and Tuesday was spent completing Alan Howard’s jazz/house crossover album entitled ‘A Sense of Place’. The first of the two days was spent mix tweaking, and the second mastering the lot. Got a great tweet back from Alan after a couple of listens through: